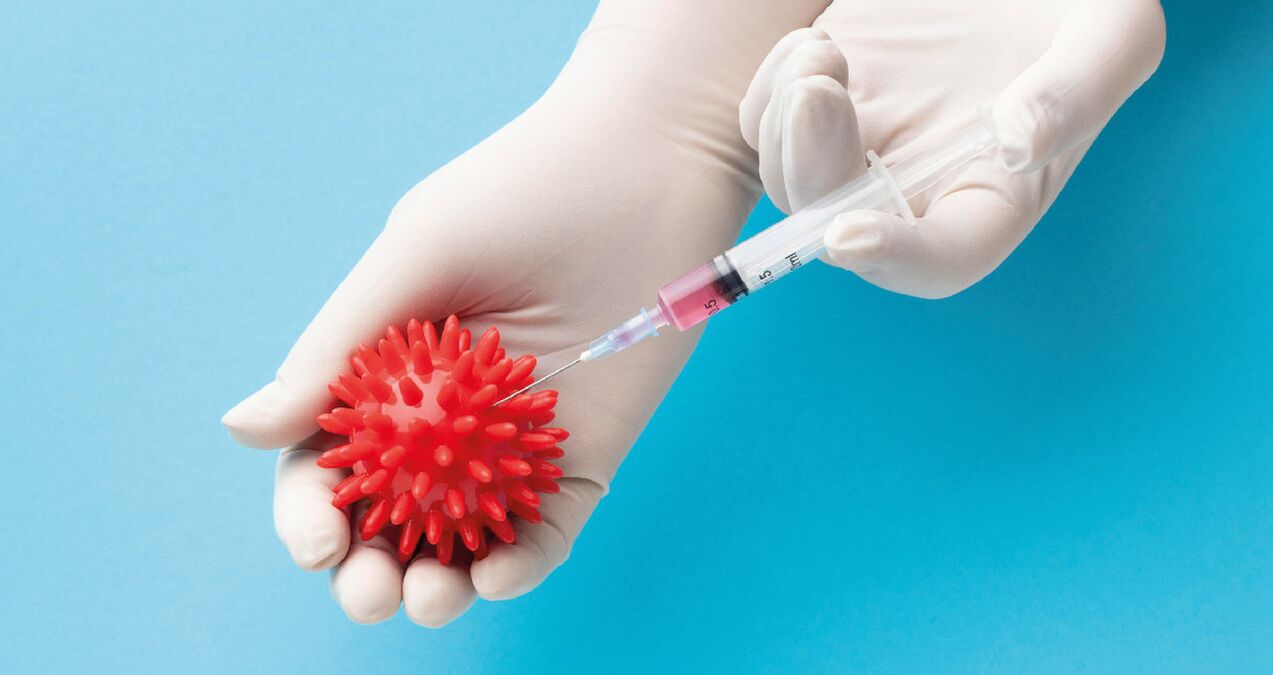 Human papillomavirus infection is one of the most common worldwide. To make matters worse, the problem is rarely discussed openly in society and comes to the doctor in the late stages of the disease. Another difficulty is that a virus that has already entered the body cannot be cured. The only way to protect yourself from it is to get vaccinated on time.

Human papillomavirus (HPV) is an unenveloped DNA virus that is relatively small in size and simple in structure. HPV tolerates high temperatures, ultraviolet rays, ethers, chloroform, and chemicals. The activity of the virus is neutralized by X-rays.

HPV is not a specific virus, but a large group of pathogenic, genetically heterogeneous infectious agents of various types. There are around 600 of them in nature, but most of these viruses only spread among animals and are perfectly safe for humans. Of the total number of HPVs, only about a hundred affect the epithelium and mucous membranes in humans. In the vast majority of cases, the virus is transmitted sexually. Various factors related to a person's health and behavior can affect the likelihood of infection.

Diseases associated with HPV have been known since ancient times. Documents handed down to us mention warts on the hands and soles of the feet and papillomas on the genitals. However, the ability to influence the spread of the virus did not arise until the beginning of the 21st century, along with the development of effective vaccines against HPV. Work on vaccine development intensified after the link between viral infections and the development of malignant tumors, especially cervical cancer, was established.

All human papillomaviruses known to medicine are divided into types, depending on whether they are carcinogenic. According to the classification proposed by the International Agency for Research on Cancer (IARC), there are 3 high-risk HPV groups:

About 14 types of the human papillomavirus are oncogenic, which means that they can cause cancer. Types 16 and 18 viruses are responsible for 75% of cervical cancer cases.

The infection process during HPV infection does not have a typical inflammatory response because it is the only virus studied that does not get into the blood of an infected person. HPV penetrates the basal layer of the epidermis through the mucous membranes. It is the lower layer of the skin made up of cells that can divide. The constant division process ensures rapid skin renewal.

The incubation period for an infection with human papillomavirus is 3 months on average. In addition, the disease proceeds in three forms:

Important!Viral infection and disease are not the same thing. At a young age, when the immune system is working at full speed, it is able to remove the pathogen from the body on its own. In many countries around the world, HPV screening is only carried out after 30 years because it was not conclusive beforehand.

As soon as the virus is in a healthy cell, the virus begins to produce its own DNA in it. Cells change morphologically, grow and transform into condylomas, warts and other skin formations.

In an infected cell, the virus exists in two forms:

Interesting facts about the human papillomavirus

HPV affects the skin epithelium and mucous membranes of the male and female genitals, the upper respiratory tract, the rectum, and other organs. Warts, warts and papillomas reduce the quality of life, worsen the appearance and impair self-esteem.

Where to go in case of illness

Since the disease is often asymptomatic, it is most often discovered by chance during a medical examination. Various neoplasms on the skin - papillomas on the neck, armpit, under the breast, genitals, and other parts of the body - usually give cause for concern and a doctor's visit.

If any papillomas, warts, and other neoplasms appear on the skin, you should immediately consult a dermatologist or dermatovenerologist.

To determine the level of cancer risk, a cytological tissue analysis is performed:

In 10-15% of those infected, the test detects several variants of the virus at the same time.

Important!At the first detected neoplasia on the skin or mucous membranes, it is necessary to consult a doctor. Early diagnosis of cancer offers a great chance of full recovery.

For papillomas on the skin and genital warts on the mucous membranes of the genitals, an oncological examination is required at least every 2 years.

There is no specific treatment for HPV today. Despite ongoing research around the world, no drug has yet been developed to destroy the human papillomavirus.

It has been proven that the risk of HPV infection is directly related to a person's immune status: with decreased immunity, the virus behaves more aggressively and more often causes the conversion of warts and papilloma cells into malignant tumors. In this regard, there is the opinion that drugs from the group of immunomodulators can be used as drug therapy for the disease.

However, the clinical effectiveness of drugs to increase immunity has not been proven by any scientific research, and they are not used anywhere in the world except in post-Soviet countries. Most experts believe that the manufacturers' assurances regarding the high efficiency and absolute safety of these funds are nothing more than a marketing ploy.

Immunity is a complex, multicomponent system, and modern science does not know which parts of this system need to be stimulated in order to fight viruses.

In clinical practice, mainly destructive treatments are used - the removal of warts and papillomas by electrocoagulation, laser, cryodestruction, radiosurgery, and chemicals. After some time after removal, neoplasms may reappear on the skin, as destructive methods cannot fight the virus on their own. A repeated removal is indicated for a recurring history.

Specificity of treatment in women

The question of the effectiveness of the treatment and prevention of HPV in women is of particular concern as the virus is a leading cause of cervical cancer. It is the fourth most common cancer in women worldwide.

HPV in women manifests itself in the form of pale pink papillary growths on the external genitals, vestibule, and walls of the vagina, cervix, and urethra. Formations on the cervix are detected when examined by a gynecologist with mirrors.

All women over the age of 21 who are sexually active are recommended to have HPV screenings every year. If HPV is detected during the screening, a PAP test is prescribed.

If both analyzes confirmed the presence of a virus in the body, a more detailed examination is prescribed, including an analysis to identify pathological tissue changes.

If both tests are negative, the next comprehensive examination can be carried out after 3 years. The risk group includes women with a negative PAP test but a positive screening result for HPV: they are assigned a colposcopy (examination of the cervix) and a biopsy - a tissue sample taken for research. The next exam is scheduled no later than a year later.

Important!HPV is not an obstacle to pregnancy and childbirth: the risk of transmitting the virus to your baby is minimal. If a woman does not have HPV and has not been vaccinated against an infection, vaccination should be postponed until the end of breastfeeding.

HPV is often asymptomatic in men, but men are carriers of the virus and infect their sexual partners. When papillomas appear, they are mostly localized on the foreskin and glans, scrotum, anus and urethra.

The complex of treatment includes the destruction of papillomas with the aim of physically damaging their cells.

Traditional medicine offers a lot of recipes for getting rid of papillomas, but it is important to understand that removing neoplasms on the skin without consulting a specialist and cytological examination of the cells can lead to extremely negative consequences. Aggressive action on cancer cells accelerates their growth and leads to the rapid development of malignant neoplasms.

Important!Before using any traditional medicine, you should consult your doctor!

Removal of papillomas by surgical methods

It is worth removing papillomas if:

Papillomas should only be removed in a medical facility on the recommendation of a doctor.

What to do if the papilloma is damaged

Injury to the papilloma is dangerous with the risk of infection of the wound and the acceleration of the growth of new formations.

In the event of accidental damage to the papilloma, it is necessary to treat the injury site with an aseptic agent and apply a bactericidal plaster to the wound. If possible, you should consult a specialist.

The best treatment is prevention

The most important method of protection against HPV is vaccination in good time. In all developed countries, girls between the ages of 9 and 11 are vaccinated, and boys are also vaccinated in the United States and Canada, for example, to reduce the number of people who carry the virus.

Important!The most effective vaccination is before starting sexual activity. Although the vaccine is readily available, it only protects against types of HPV that a person has not yet come across.

Two HPV vaccines have been registered and approved for use. The US-made vaccine protects against HPV types 16 and 18, which cause cervical cancer, and types 6 and 11, a common cause of warts, genital warts, and other neoplasms. The vaccine, made in Belgium, protects against the 16th and 18th types of the virus.

HPV vaccines have undergone many clinical studies and have been shown to be highly effective and completely safe. They only contain viral envelope proteins that serve as antigens for immune cells. The risk of developing cervical cancer after vaccination is reduced by more than 90%.

HPV is a very common infection that in many cases can significantly reduce the quality of life. Despite the lack of drugs for the virus, timely vaccination and a serious attitude towards methods of protecting against infection during sexual intercourse will help prevent the disease.